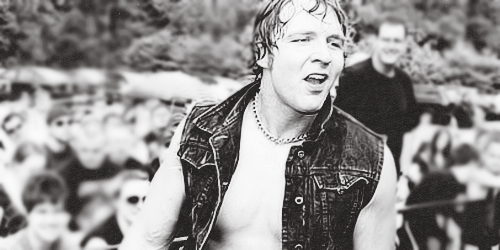 It wasn’t a taser, actually, but a stun gun and he was waving it right in my face. Click, click, buzz buzz . . . I actually thought he might get me accidentally – or maybe on purpose. I didn’t know him, but knew of his reputation as a loose cannon.

It was late 2005 and emotions were at a peak. The NWF’s Chad Allegra and Roger Ruffen had just “invaded” the HWA the week before.  And now it was HWA’s turn as Cody Hawk, Brock Guffman, and Jon Moxley – who would later become WWE’s Dean Ambrose – paid an unannounced visit to BoneKrushers.

I knew they were coming.  In fact, I met them outside the building and talked with them – specifically Brock, who would handle the talking – about what was about to happen.  He was calm and I was a little worried because I didn’t know what he planned to say.  This could be very good or very very bad.

Finally it was go-time.  I ran out to the ring area and yelled for security to come. They ran out to help me and we busted back in through the curtain “holding back” the HWA crew.  The crowd was electric and that’s when I noticed that Moxley had electricity of his own; he was holding a stun gun in his hand.  I stepped back a couple healthy feet.

If you’ve ever seen a Jon Moxley promo then you know that he’s either an evil genius or legitimately insane.  But either way, he’s always been entertaining.

This NWF vs. HWA angle was the hottest thing Cincinnati wrestling had ever seen.  I had the honor of doing commentary on the Chad Allegra vs. Cody Hawk match in Fairfield, Ohio that featured a Jon Moxley run in.  He would come back to work for the NWF 2007 having a great feud with Ice, a bunch of matches with the Buffalo Bad Boy Brian Jennings, and always worked very hard in the ring.

I’m heading down to the WWE event tonight at US Bank Arena and I’ll see Dean Ambrose in action in a WWE ring.  Congratulations are in order for him as he worked very hard to accomplish his dream.  He’s evidence that a good look, good training, and hard work can pay off.

Tonight, I doubt I’ll get too close.  But just in case . . . I just hope he leaves the taser at home.

Kirk Sheppard is the Northern Wrestling Federation‘s Manager of Champions and will lead his tag team into battle for the NWF Tag Team Titles tomorrow at NWF Seasons Beatings at the UAW Hall on Symmes Road in Fairfield, Ohio.  He has been involved in professional wrestling for over 15 years.